Photojournalism and the War

With Light as His Paintbrush

The Civil War was also notable as the first war extensively documented through photography. By 1861 photography had advanced to the point that an image could be captured within less than a minute, rather than the tens of minutes that had been required for some of the earliest photographic processes. As a result, although it was not yet possible to capture actual action shots, it became feasible to take photographs of units at parade rest, or of a battlefield shortly after the heat of a battle had passed.

By far the most famous of the Civil War photographers was Matthew B. Brady. Trained by Samuel F.B. Morse, a man remembered primarily as the inventor of practical telegraphy, but who was also a painter, Brady combined an artist's sense of composition with a keen nose for business. By the outbreak of the Civil War he had opened a chain of photography studios, and although he was not personally present at Fort Sumter, several of his people were on hand to capture images of the fallen fortress and its garrison. However Fort Sumter was close enough to town that it was possible for these photographers to take the wet-plate glass negatives back to their regular studios. A more difficult challenge was posed by the Battle of Bull Run. Because wet-plate films had to be developed quickly, it was necessary to bring the darkroom to the site. Brady created two photographic wagons, mobile darkrooms custom-built with shelves and drawers to hold all the supplies a photographer would need in the field.

However the bulk of these wagons, nicknamed "Whatsits" by the soldiers, made them easy targets for enemy artillery. Sometimes they were mistaken for supply wagons, but often they were just convenient targets for artillerymen hungry for something to shoot at. More than once Brady or his assistants narrowly escaped with their lives when their photography wagons were destroyed in action. If they did not have a second mobile darkroom on hand, any pictures they had shot would have been lost to posterity.

Even with such primitive and often intractably limited technology, Brady and his colleagues still managed to have a powerful influence upon public opinion through the images they sent back to the population centers of the East Coast, particularly Washington, D.C. In the nation's capital, many civilians visited Brady's central studio to look at the photographs he had taken. 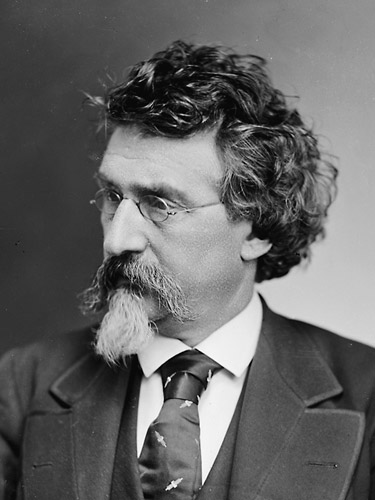 Matthew Brady photographed in 1875. He is credited as the father of photojournalism.

However these beginnings of photojournalism were stunted as a result of a simple fact: there was no practical, inexpensive way to incorporate images into text. The printing press was a monochrome process, creating spots of black ink on a white page, while the photograph was a continuous-tone process. Thus the printing press would destroy all the gradations of tone in a photographic image. A few photographers or newspaper publishers hired engravers to transfer the photographic images, but this greatly increased the expense. As a result, the only printed materials with photographs in them were a few very expensive books with separate photographic prints tipped in.

This technical bottleneck meant that Brady had no good way to translate his collection of history-making images into an income. Attempts to create a traveling show and charge admission failed, as did negotiations for the government to purchase them for a historical gallery. Brady ended up dying in poverty and ill-health, shortly before the invention of the halftone process, which enabled the printing of photographic images by screening them into a mesh of tiny do